Taking Reliability Block Diagrams to the Next Level 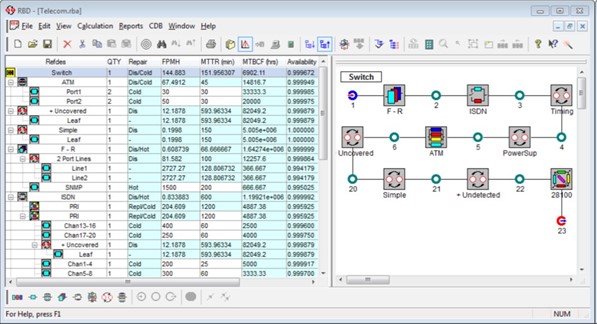 In the previous post, the basics of a Reliability Block Diagram were covered using simple Series or Parallel paths.  In real life, most systems or processes are not that simple and require a different level or type of models, often used in combination with other types.

So in our continued exploration of RBDs, let’s explore a few different models that may be used.

K OUT OF N MODELS

K out of N Models is used to indicate that a specific number of sub blocks must be functioning in parallel to ensure the block will operate.  A further dive into the K out of N model shows that there are two types of K out of N models;

This type of model is used when there are multiple assets providing the same function and working together to deliver a defined output such as flow.  In both examples above, the required output may be 600GPM.  In the example of identical sub blocks, the model would be 3 out of 4 (3x 200GPM).   In the example of different sub blocks, the model would change based on the pumps that are being considered 1x 600GPM, or 1x 200GPM & 1x 400GPM).   Therefore it is important to know the system and how the model works.

A standby block will typically have sub-blocks, but only one of the sub-blocks operates during the block operation. First, the primary sub-block operates, and then each of secondary sub blocks operates upon the primary or another secondary failure.  Each next operating sub-block is switched on immediately after the failure of the previous one. The whole standby block fails if all its sub blocks fail.  In the Standby model, sub blocks switch each other when fails and, sometimes, when they are repaired, so they are dependent.

For the STANDBY model, various “switching on” queues following “hot repair” of sub blocks are considered:

The RBD can be used with Markov Models and is described regarding states and transitions using State Transition Diagram (STD) of the corresponding Markov chain.

A block fails when it transits to a state enclosed to a failure mode. Transitions between states are caused by failures and repairs of sub blocks.  Typically the reliability engineer will correspond each state to a good condition or failure mode. The state has a probability that will change with time. The STD calculation algorithm computes these probabilities for each time instant using Markov differential equations. Sum of all states probabilities at each moment = 1. Sum of good states probabilities = the block Reliability, if there are no repair transitions (from failed to good states); the same sum = the block Availability if there are repair transitions.

An example of a Markov Model in use is when two power supplies are used in parallel.   Both operate together at 50% load, however, once one fails, the other operates at 100%, with a 50% reduction in operating life.  Therefore the repair time is a critical consideration in a Markov Model.

A network model could be used to model a communication system or pipeline (provided there are multiple paths in the pipeline).  A typical network RBD contains connections (sub blocks) and nodes (contact points of sub blocks). Network blocks are considered in a failed state when there are no paths from its input nodes to its output nodes through all connections.

When working with network models, the flow of the product (information, electricity, oil, gas, etc.) needs to be considered.  Each sub-block will need to define if it is unidirectional or bidirectional as it will have an impact on the model.

In addition to these different types of models, there are a few additional items that should be considered when developing and modeling a system using RBD.  First is the repair type;

Most repairs could also be classified as;

Also, each block has many different parameters over and above Reliability;

Not all of the parameters need to be entered; some can be calculated from others.  This is why it is important to fully understand the model and what is being calculated.

Many of these models can become large and complex requiring extensive mathematical models and calculations.  Once the various models are used in singularity or in combination, the RBDs are extremely complex.  This is where a specialized software (such as BQR’s CARE RBD) can come in handy.  But before using the software, be sure you understand the various models and how they work.  Remember, Garbage In = Garbage Out.

If you aren’t using Reliability Block Diagrams in your Reliability, Availability, Maintainability, and Safety (RAMS) analysis, you should be as they are extremely powerful.

Remember, to find success; you must first solve the problem, then achieve the implementation of the solution, and finally sustain winning results.